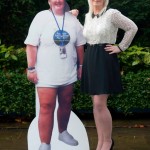 Amy lost nearly 8 stone in total – and went from a size 24 to a size 12 – by following the Slimming World Food Optimising Plan.

After joining Slimming World in 2005, she lost her weight by making home made burgers with extra lean mince, homemade Slimming World chips and jacket potatoes with beans and salad.

Teaching herself how to cook healthy meals, she discovered a new flair in the kitchen and now loves cooking meals for herself and her family.

“Before I went to group I was scared, I worried what people would think of me and thought I might be the biggest person there. After a few weeks I saw how well it worked – I was even Slimmer of the Month – and I was hooked.”

“I’ve got the figure I always wanted, my dream job, the perfect fiance and a beautiful baby girl. Being named Slimming World’s Miss Slinky 2014 is just the icing on the cake.”